“I started writing poetry when I heard Rudyard Kipling’s ‘If’ read to NFL highlights when I was in high school,” said Berecka, who said he read little poetry if any before that moment. “Poetry was my release and was much cheaper than therapy.”

Berecka’s poetry contains stories of his childhood that are lighthearted and funny yet emotional. His poems range from religion and family to humanity. 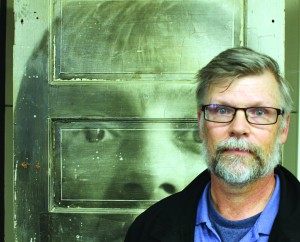 “At UNT I took a creative writing class hoping the professor would tell me to stop writing poetry, but it ended up backfiring on me,” Berecka said. “My professor liked my poetry and entered me into the university’s poetry competition, which I later won.”

Berecka, who grew up in rural New York and came to Texas for college, discovered his talent in poetry in a household that had no poetry in it.

“My father was a juvenile delinquent and high school drop out, so poetry was never in the house,” Berecka said.

Since his start in poetry Berecka has published three books and is now working on his fourth.

“On top of writing poetry and working in the library, I am teaming up with the English department to host an open mic night for local poets,” Berecka said. “At this open mic night, we like to have one featured poet for the headliner, and have people volunteer to share their poetry to open them.”

Open mic night takes place one Wednesday night a month in Room 514 of the library on the East Campus. Fliers will be posted around campus as the next event draws near.