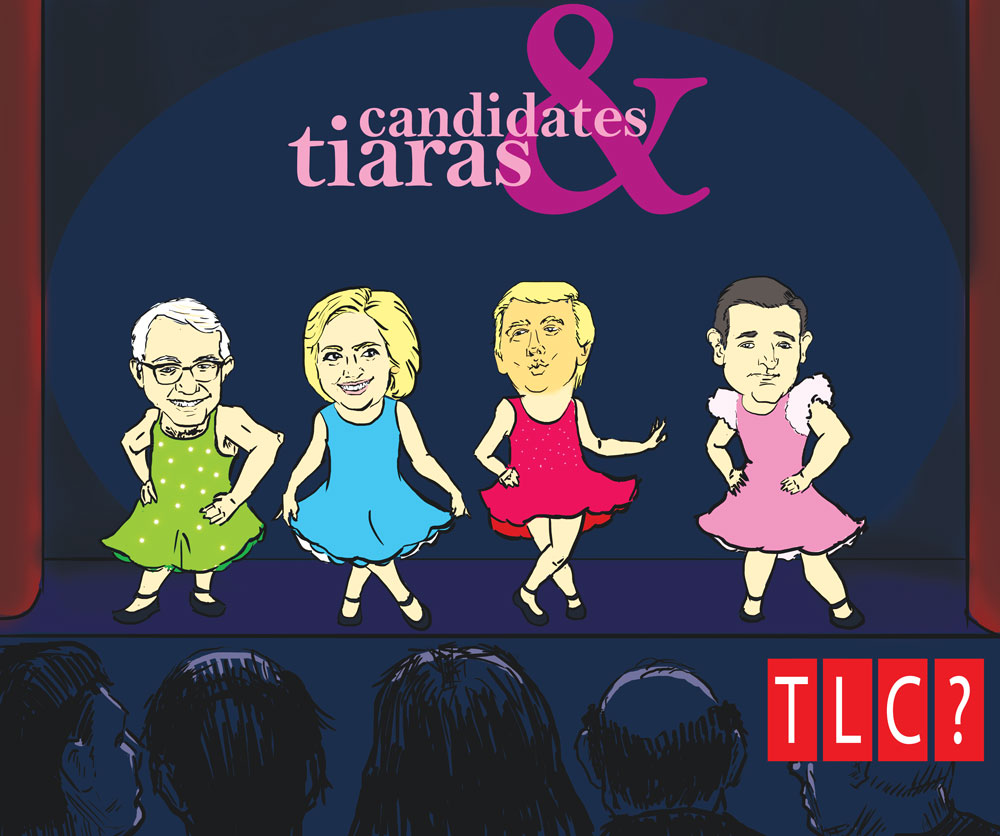 When you turn on the news and see information on the upcoming primary elections, Donald Trump, Hillary Clinton or some other candidate who recently said or did something unfavorable tends to be the topic. While our country considers the primaries, it seems the only options they have are those that are presented to them, which mostly includes how much a candidate hates another candidate or how wrong it was for someone to use the restroom during a debate.

Since Sarah Palin decided to endorse Trump, a lot of news outlets have covered him even more than normal. It’s not common to find out what the Republican does otherwise, aside from what he thinks of his new ally and what he thinks of the Democrats. Anyone voting should hope their prospective candidate wrote an autobiography because the media don’t seem to want to share what matters: the policies that concern the candidates and the issues they need to address.

Media have a stronger hold on voters than any individual voice, and because most people vote based on what they hear and see, the media need to take their role seriously. This includes those who choose the questions during the debates. Television news has quickly spread its entertainment poster child across the programs as if they were pageant princesses in “Toddlers and Tiaras.” Trump is not meant to be a form of entertainment, nor is Clinton, Ted Cruz or any other candidate.

According to the Jan. 27 poll on realclearpolitics.com, Trump is ahead of Cruz by 7 points, while Clinton is ahead of Bernie Sanders by 19.

Some of his views, although they are discussed in the news, are hidden behind the joke he has become because of the attitude he has in front of the camera. Who cares? Voters should be more concerned with what he stands for and what he will do as commander- in-chief, not how much he does or doesn’t like Cruz.

Similarly, Clinton’s view on immigration angles toward waiving deportation for some immigrants, specifically those who are illegally in the United States. She also supports Obamacare and wants to cut middle- class taxes, as well as closing corporate tax loopholes, according to PBS News- Hour.

Instead of discussing what Clinton might have lied about — her secretive emails and possible corruption, as well as her views and how she reflects them, should be the primary discussion.

This goes for all candidates. The “dirt” should apply to their qualifications as a potential president. What they think and do in their personal lives should be of no consequence unless it has an effect on their prospective position with the country. If the media won’t stop reporting about the “Toddlers and Tiaras”-worthy episodes of attitude and comments the candidates throw at one another, voters need to do their own research. Voting isn’t a simple checkmark or click on a ballot. It isn’t a “what happens next” decision, but a choice that will determine who sits in the Oval Office.

Voters who think Trump should top the charts might not know exactly what he stands for because of how little it is discussed in the news. While his views on immigration have been reported due to the uproar that came as a result, his views on replacing Obamacare have been rather silenced. In addition, he believes marriage should be defined state by state, according to PBS NewsHour.