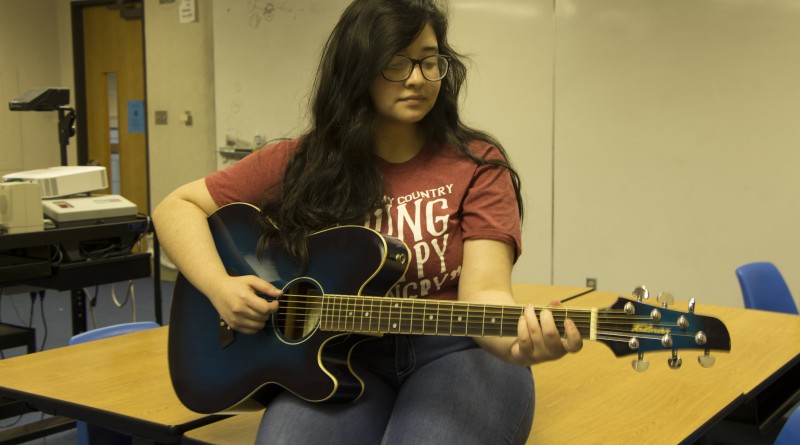 Before performing on stage, Gema Rodriguez got nervous as she saw people in the crowd, waiting for her to sing.

“I always get jitters as I’m about to perform. I’m not as nervous as I was before when I was younger because I’m more experienced now,” said the Collegiate High School sophomore.

“I had no idea I was going to win, and I was really happy, especially because last year I placed second,” Rodriguez said. “So this year to finally get first place it felt like a really big accomplishment.”

Rodriguez has been performing since she was 11, and now has her own band, The Jams. The group usually plays ’80s rock but they are open to all music.

At the competition, Rodriguez enjoyed a junior dance group that took third place.

The song that led her to win was “So In Love,” an original co-written by her manager, Machy De La Garza, from her former band Bomb Girls.

Rodriguez is inspired by outstanding female performers such as Stevie Nicks and her own grandmother, who taught her how to play the guitar and led her to a musical path.

Her grandmother Felipa Sanchez-Lopez is the only member of her family to play an instrument, and Rodriguez feels a close connection to perform and carry on her grandmother’s passion.

Collegiate High School sophomore Elijah Rodriguez has known Rodriguez since elementary school and supports his friend and her love for music.

“I’m proud to see my friend pursue a passion of hers and I know one day she’ll be on the screens of many TVs in homes,” Rodriguez said.

Rodriguez plans to major in Science, Technology, Engineering and Math (STEM), even working for Collegiate’s robotics team, but will always have a close relationship with her original music.

“I’m going to focus on a more academic approach and not really so much with music.” Rodriguez said. “Music will always be a hobby of mine, who knows if I do take off with music I would really love to perform and have gigs.”