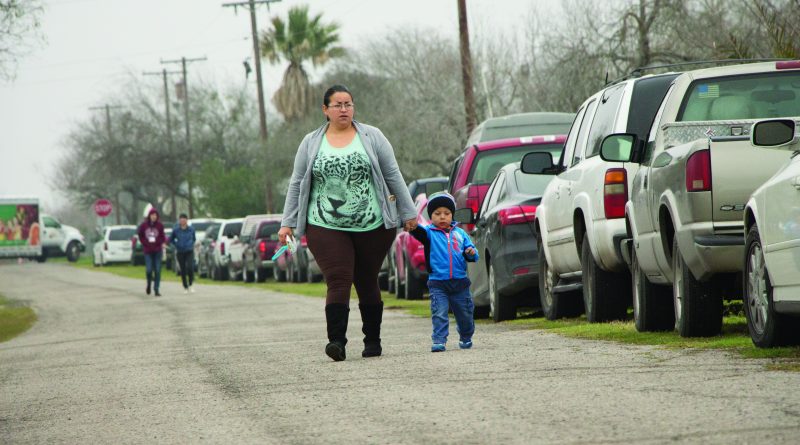 Rosa Garcia walks with her son Jonathan at the monthly food distribution organized by Lionel and Juanita Lopez.

Families struggle for progress with the water, environment

Located outside city limits, unincorporated settlements are attracting low-income individuals seeking a place to build a home and call their own.

Lacking basic infrastructure and especially dealing with toxic water issues, residents of these settlements, known as colonias, learn to adapt to what they call “the life of a colonia.”

In Nueces County alone, there are nearly 200 unincorporated areas dealing with the unsafe and unsanitary environment that comes with living on a colonia.

After living in the colonia of Petronila for seven years with her father, Del Mar student and social work advocate Yvette Reyes remains hopeful about the living conditions that continue to affect her family life.

“We have water wells, but we have to buy our own water,” she said. “We can’t drink, we can’t cook with the water … the water’s pretty slimy, you can tell the difference.”

Reyes and her father regularly buy five-gallon containers of water a day, but she also mentions that it’s not the worst of what she’s seen in the farther-out colonias. While living on their own property in Petronila with her father, Reyes has seen change, but more often than not, those changes become unfulfilled promises.

“A couple of years ago, when I first moved out there, they started putting in (new) water lines — we are a little bit fortunate, yes, but they stopped right before our block,” she said. “So we still don’t have water offered by the city.”

A major concern is the dilapidated state of the roads and the danger they pose to the community.

Combined with her already established love for social work, Reyes’ direct connection to the conditions in the colonias has motivated her to help out the Colonia Initiative in whatever way she can. Reyes firmly believes in the progress she and her fellow activists have worked so hard for, vowing to leave the colonias only when conditions have improved.

Recently, Reyes went with the DMC Social Work Club to pass out water to the colonias.

ENVIRONMENTAL
For colonia residents, their biggest issue is the land they live on.

“Nueces County is toxic,” said Lionel Lopez, one of the founders of South Texas Colonia Initiative, a nonprofit that has helped the colonias for over four decades.

Often flat and low-lying, the land is subject to flooding that can last for days. Rosa Garcia of the Rancho Banquete Colonia said the flooding in her area “can get super high,” citing one time when the water went up to her knees.

Lopez and wife Juanita, who together run the South Texas Colonia Initiative, say the county often will not help them build the proper drainage systems for the area, which causes more problems.

“When there isn’t proper drainage it causes the flooding water to stay put for days,” Juanita Lopez said. “Then not only do the septic tanks overflow, but the residents have a hard time getting around.”

The drainage ditches that do exist are usually not up to par, according to the Lopezes.

“They are often full of gross and toxic water. The creeks and ditches are all dead,” Lionel Lopez said.

Juanita also said the standing water is a breeding ground for mosquitoes and more so diseases such as West Nile and malaria.

“Oil wells play a huge part in making the water dirty,” Lionel said, “but also the farmers are putting pesticides and chemicals on the plants that are going into the water table. It all goes back into the water.”

He said the county does not help control the toxic environment.

For the colonias to begin to get better, the Lopezes believe that the water needs to be one of the first priorities.

“So many people still don’t have water out there,” Lionel said.

They also believe that the upcoming hurricane season could enhance many of the problems that colonia residents face.

“People are still recovering from Harvey, “Juanita said, “and the next hurricane season is just around the corner.

POLITICAL
While many people want the colonias to get help, actual help proves to be hard.

Most recently, Gov. Gregg Abbott vetoed funding for the colonias, cutting almost $860,000 in the Colonias Initiative Program within the Secretary of State’s Office. The office, which closed last fall, would often bridge the gap for colonia residents and state services.

Keta Caballero, the former director of the Colonias Initiative Program, said that “before residents could contact our office and we would help get them the help if we could, but now they have to do it all themselves.”

Even with the former office, technicalities from county and state laws and regulations often keep the colonias from getting help.

The county commissioners are usually the people who deal colonias at the local level, but do not have the power to fix the most vital issues.

Many colonias are not even recognized as colonias because of the Cranston Gonzalez Act of 1990 that only recognizes colonias established before Nov. 28, 1989.

This leads to newer colonias dealing with the same problems as older ones not being eligible for help or resources allocated to the colonias.

“The county does not oversee water, we don’t have any control, we don’t own water companies, we don’t have any water lines so we’re relying on private entities to supply the water to these colonias,” Nueces County Commissioner John Marez previously told the Foghorn News.

Colonia residents also have a hard time with proper transportation. Colonias fall under private land, which makes it illegal for county resources to be used on private roads. This leads to the roads being dilapidated and hard to use.

These problems become immediate for residents when ambulances or police are unable to use the road or the residents cannot drive on them.

FUTURE
For residents, the poverty they often live in means that they just have to make the most of what they have and try to make it better.

Rosa Garcia, from the Rancho Banquete Colonia, wants to build her life and make the most of it for her family of seven.

Rosemary Jimenez, from the Cindy Park Colonia, however, is working toward leaving as soon as possible.

“I can’t live out here anymore,” Jimenez said. ”If I stay out here, it will kill me.”

Yvette Reyes says her plan is to stay “in the (colonias), my plans (are) to help everyone in this area eventually have fresh water.”

Reyes also wants to work on getting clean water to the colonias. She recently has begun working on more projects with the colonias for the social work club.

Lionel and Juanita Lopez say that for the colonias to receive help, they’ll need elected officials who advocate for them.

“The colonias are a sore spot for officials in this area,” Juanita said. “They never come to the colonias and they don’t offer a lot of help.”

According to the Lopezes, the most help that elected officials have done recently was Marez, who got the Food Bank to once again deliver food out in Driscoll.

After nearly four decades, the Lopezes aren’t close to finishing.

“There’s always something,” Juanita said. “Slowly things have changed after years of advocating and there will always be something.”

They are working on trying to bring a grocery store to the colonias to provide them with fresh food and to get a space in Banquete for a clinic or other reasons.

“It’s never ending, but we are just going to keep on working, even if it is just one step at a time,” Juanita said.

The Nueces County colonias continue to face environmental injustices that advocates like Lionel and Juanita Lopez, the DMC Social Work Club, and many others are active in helping residents obtain basic needs because as Juanita puts it: “Colonia residents are the ‘forgotten people.’”

UP NEXT: Part 5: A land of unfulfilled promises

4 thoughts on “Despite problems, residents still hopeful for future”