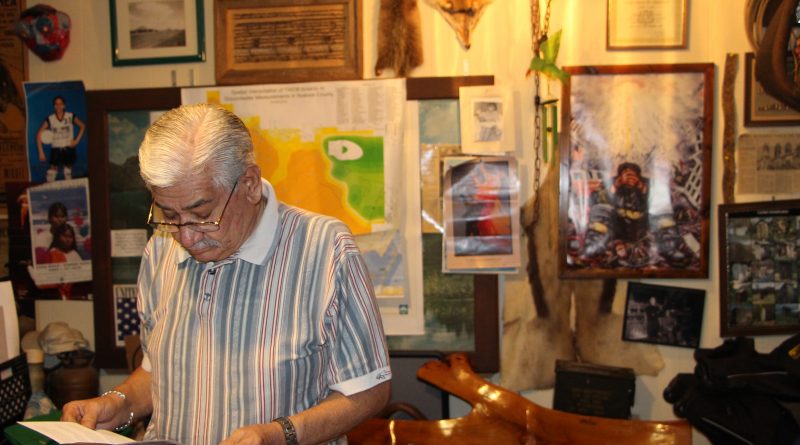 Lionel Lopez goes through old documents from his work with the colonias. He and his wife, Juanita, run the South Texas Colonia Initiative, which has been helping residents of the colonias for over 40 years.

Lionel Lopez remembers the night in 1974 that would put him on a course that would occupy the next 40 years of his and his wife’s lives.

On a cold, raining night in 1974 during his days as a firefighter, Lionel Lopez responded to a call for an elderly woman suffering from a heart attack in one of the Nueces County colonias. He was made aware of the freezing interior of the unkempt home and the unstable surroundings she was living in.

“She was an elderly lady and we got her out, and golly…” he recalled. “You could see it was very cold inside. And I saw her conditions, and it needed a lot of work.”

The next day, during his day off, Lionel returned to that colonia to talk to some of the neighbors about their lives. This is when he realized there was more help needed in these communities than what he could have imagined.

Lionel and wife Juanita Lopez, both Corpus Christi natives, have been working for and within colonias together for almost 40 years. Through their time, they have been pushing for change in nearly every aspect in every colonia in Nueces County.

The couple, married for over 40 years, has brought assistance to the colonias at first through bringing over extra groceries, stuff from their house and clean gallons of water. They then began bringing forward the advocacy of health programs, food distribution programs and environmental programs.

“Janie would buy a little extra at H-E-B. At that time I didn’t know the water wasn’t any good, but I would take water from here,” Lionel recalled.

Since establishing the South Texas Colonia Initiative as a 501(c) nonprofit, they’ve remained active in keeping open the discussion of conditions in the colonias to lawmakers, members of Congress, city council members, etc., with a notorious reputation.

“They do not want to have anything to do with us,” Juanita said about the county commissioners.

Through perseverance and organization, Lionel and Juanita have been advocating change to improve the quality of life for residents of colonias who are stricken with health problems in which Juanita introduces health care services, and the unstable land conditions in which Lionel finds the environmental causes for. According to the Lopezes and the Texas Commission on Environmental Quality, colonias in Nueces County have received violations for exceeding safe levels of arsenic since 2008, with the exception of a brief period in 2014. The high levels of arsenic consistently make the water unsafe for basic usage or consumption.

According to Juanita, it’s Lionel who works with the environmental parts. It’s Juanita who takes care of the health aspects. Although the executive direction of the initiative is split between the focuses of Lionel and Juanita, they receive help from university social work programs, volunteers and a small board who have grown the same type of passion.

Throughout their years working with residents of colonias, they have helped families through nearly everything, including parents suffering from depression and unable to take care of their children, to severe and terminal illnesses among the youngest of the residents. Lionel recalls multiple cases of spirited children who he has only briefly been able to get along with until their conditions, usually unable to receive treatment, take their lives.

“They’re like family, because we see them once a month — they have to tell us all the stories. We’ve had some with cancer that don’t have insurance. What are you going to do?” Juanita said with a sigh. “A lot of times, they just want a shoulder to cry on.”

Lionel and Juanita have been working with colonias since the mid ’70s, but have been married since their adolescent days.

“It was a church dance,” Juanita said with a smile. The couple, who both went to Carroll High School, met because they both had glasses, and have stayed together since.

It was never anyone’s obligation to watch over the forgotten communities of Neces County; it was the drive that pushed two local activists to create an initiative and devote their lives to it. Lionel and Juanita have continued to lead the initiative and reassure a change for the residents of the outskirts of Nueces County.

UP NEXT: Part 3: Life on a colonia takes its toll

4 thoughts on “Fighters for the forgotten”