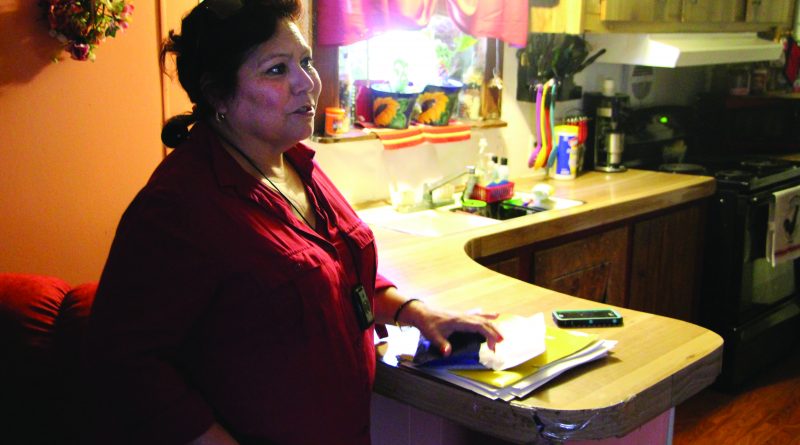 Rosemary Jimenez, 56, has lived on the Cindy Park Colonia for over three decades. She suffers from heart problems and seizures due to multiple strokes, all of which she blames on the drinking water, which has high levels of arsenic.

Rosemary Jimenez has lived in the Cindy Park Colonia for more than three decades, but according to her, “this isn’t a life I would recommend to anyone.”

Sitting in her small trailer home on nearly two acres of land, Jimenez, 56, lists the illnesses that plague her: ”I am handicapped. Since 2009 I’ve had multiple strokes. I have seizures and heart problems. I was healthy before I came here.”

She isn’t alone. Jimenez says that “in the last three years, six people have died of cancer on my street alone.”

Since moving to the colonia, Jimenez has tried to make the most of her life and help others, but life of the colonia has taken its toll on her.

Jimenez moved from Pasadena, near Houston, after a shooting her daughter’s high school in 1985.

“My mother ran a store in the colonia and convinced me to come out here and help her,” Jimenez said.

When she moved out here, she did not know of the problems that the colonias have, such as illness, flooding, poor infrastructure and, most importantly, the water.

The colonias are unincorporated settlements that are often found near the border. Texas has almost 2,000 of them, with more than half a million people living there, almost all of them Hispanic and poor.

Many people are attracted to the land because it is often cheap and out in the country, but nearly all of them suffer from problems that nearby cities often don’t take up.

The most common problem for the colonias near Corpus Christi is water, which often has traces of arsenic, uranium or a combination of both. The Texas Commission on Environmental Quality has said colonias in Nueces County have received violations for exceeding safe levels of arsenic since 2008, with a brief exception in 2014. The high levels of arsenic consistently make the water unsafe for basic usage or consumption.

Jimenez said the water is the cause of not only hers, but many others illnesses and problems.

At first, Jimenez tried to make the most of her life on the colonia. While at her mother’s convenience store, she would help her neighbors.

“We were the only store out here,” Jimenez said, “We had credit for the locals who didn’t get paid until the end of the month. We would get gas or food if someone needed it, but now they don’t have that. There is no bus and no help for those who can’t get around.”

Jimenez’s mother had a stroke in 2001, leading her to take over until her own stroke in 2009; afterward, the store was forced to close.

Jimenez has tried to help the colonia residents, often with Lionel and Juanita Lopez, the founders of the South Texas Colonia Initiative. Jimenez has known the pair for more than 20 years. However, she says she can’t do much anymore.

Her most recent stroke left her without the ability to walk or use one side of her body. Matched with her other illnesses, Jimenez can’t get around very well and is not able to drive, often leaving her alone in her trailer home.

While she is trying to leave, it is hard for her, and many other colonia residents, to start over.

Most residents, like Jimenez, own the land that they live on, which is part of the appeal that attracts people to colonias. A nice amount of land in the country can be bought for cheap; however, once people settle it is often hard to leave.

However, not all residents want to leave.

Rosa Garcia, 32, lives in the Rancho Banquete colonia with her five children and husband. She has lived there for over 12 years, but doesn’t plan on leaving.

“I like that it is far away from the city,” Garcia said. “But it is hard sometimes and a lot work needs to be done on my home.”

Garcia also lives on a trailer on some land in a colonia, but she says that instead of trying to leave, she wants to fix her up her home and stay here.

Both Garcia and Jimenez’s homes suffered damage from Hurricane Harvey, which highlighted the problems that many colonia residents face.

“My house suffered a lot of damage, but no one came to help,” Garcia said. “I filled out the FEMA forms and tried to ask for help, but nothing ever happened.”

Jimenez also said she requested help from places such as FEMA, but that many colonia residents don’t receive help from such organizations or county services.

The problems they face often begin to pile up and create a cycle of despair and poverty.

One of the more common problems is the flooding, which many residents are unaware of when they settle.

“Most of the land is low, flat and has no proper drainage,” Juanita Lopez said. “For some it can be up to a person’s knees and leave them stranded.”

Both Jimenez and Garcia said flooding affects their colonias and that storms like Harvey can create more problems that residents can’t fix.

With most colonias being far from towns and amenities like grocery stores, police and ambulances, getting help is hard, but leaving can be harder.

People come to the colonias for a variety of reason. Cheap land, a new start, a place away from the city. For some, the problems build up and become too much, but for others they see these obstacles as another turn in the road.

Garcia knows of the problems that the colonias bring, but doesn’t see them as a reason to leave.

“It can get hard out here, but if I had to choose here or the city I’d stay,” Garcia said.

She plans to fix her home, which suffered some structural damage from Harvey. Her husband is a carpenter, so she says she is waiting for some time for them to fix it.

Jimenez, however, is actively trying to leave her home and get away from the colonias.

“I wanted to get out to the country, own land and I got comfortable. I lost my husband, I lost my father-in-law, the kids grew up and went to different places,” Jimenez said. “But for me, I’ve stayed here. I’m only 56 and I’m this sick. I can’t stay out here, I don’t want to be stranded out here, but this the life of a colonia.”

UP NEXT: Part 4: Despite problems, residents remain hopeful

4 thoughts on “Life on a colonia takes its toll”