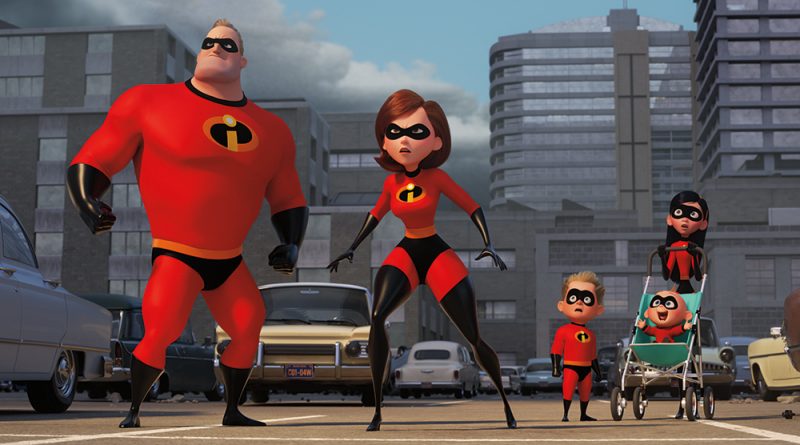 SUPER FAMILY -- In Disney Pixar’s “Incredibles 2,” Helen (voice of Holly Hunter) is in the spotlight, while Bob (voice of Craig T. Nelson) navigates the day-to-day heroics of “normal” life at home when a new villain hatches a brilliant and dangerous plot that only the Incredibles can overcome together. Also featuring the voices of Sarah Vowell as Violet and Huck Milner as Dash, “Incredibles 2” opens in U.S. theaters on June 15, 2018. ©2017 Disney•Pixar. All Rights Reserved.

Family is more than enough in this movie with the Incredibles

The heat wasn’t the only thing that packed a punch this summer. After a 14-year wait, the supers finally made a comeback in Disney Pixar’s “Incredibles 2.”

Picking up where the last movie left off, the super-powered family has to stop The Underminer from destroying the city. However, the family is conflicted whether to use their powers because supers are still illegal. This becomes the central plot of the film. After the family successfully stops the attack on the city, they automatically face the repercussions of using their superpowers and are taken into custody.

After being released and forced to relocate out of town, the family comes to the conclusion that world is simply not ready to acknowledge superheroes yet. This is until a wealthy businessman, Winston Deavor, offers them an interesting proposition. Deavor has a passionate love for superheroes and the work they do. It is this passion that motivates him to promote the actions of superheroes and try to get them inducted back into society.

Elastigirl (voiced by Holly Hunter) plays an important part in the movie, as she is the poster child for supers to be launched back into the world. Her heroic acts and stellar combat skills make for excellent battle scenes throughout the film. The movie does an excellent job of sticking to the roots of its predecessor. Following exactly where the last movie left off the helps give the viewer a strong sense of whets happening.

Another strong component in the movie is its character development. The movie does a good job of showing new sides to the characters’ personalities that have never been seen before. For example, in the first movie Elastigirl was shown to be a retired super who cares about protecting her family. However, in the second film her dynamic changes drastically. She goes from an average mom to a front-page superhero.

Overall “Incredibles 2” was well worth the wait, and truly delivered on its 14-year promise. Many of the original characters return to give the series that super-powered aspect it always possessed.

The “Incredibles 2” is scheduled to come out on DVD and Blue-ray in mid-October, and is available for pre-order on iTunes and Google Play.