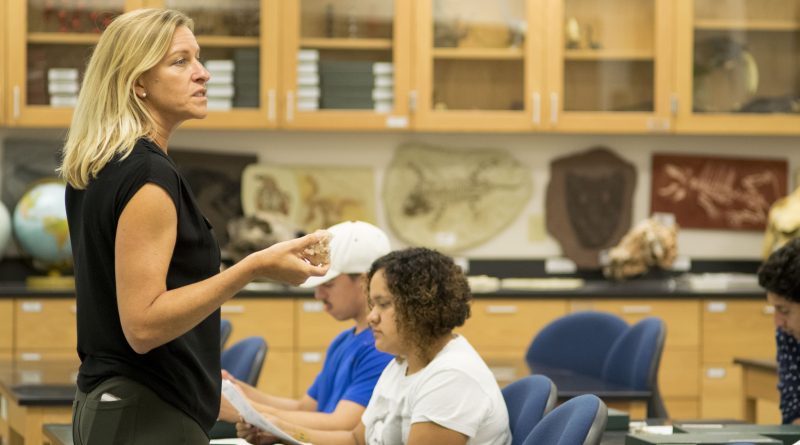 Erika Locke, a new geology professor at Del Mar College, developed a love of geology at a young age when she lived in Montana. Her grandfather would tell her to go out into the woods and find rocks for them to examine.

“He would tell me to bring him rocks, crack them open and bring them to him,” she said.

Fascinated by the fact that there were sea fossils in a place where there was no ocean nearby, her interest in geology sparked.

“I always kept a big box of rocks with me so I kind of knew,” she said.

As geologists, “we don’t get much glory, but we get to travel a lot,” she said.

After working with Exxon, Locke settled down in South Texas and took a job at Texas A&M University-Corpus Christi as a geology instructor.

She then met Walter Kramer, former Professor Roger Steinberg and some of Del Mar’s students at a local Geologic Society meeting where she learned about Del Mar College and the Geology Department. She liked how enthusiastic the students were about geology and the department here at DMC.

“A lot of the students at TAMU-CC came from Del Mar and I wanted to see what they were learning, who’s teaching them and how they’re getting so much enthusiasm for the subject,” she said.

When Steinberg decided to retire, “they called me right up and said you have to apply, we want you to apply,” she said.

She applied because she did not want the department to lose the excitement that Steinberg and Kramer had built together.

“I did not want to see what I saw was a good department have no one to helm it,” she said.

“I would always ask my students when they first come in to tell me something about you that I wouldn’t know just by looking at you and I would learn all kinds of things. It’s always fun to learn about different students,” she said.