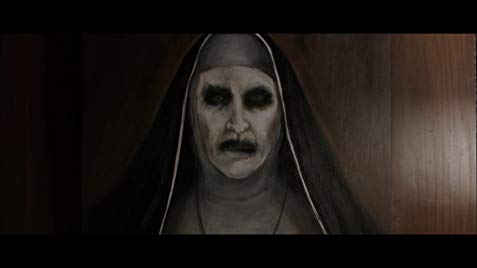 “The Nun,” new in theaters, is a spin-off adaption from James Wan’s film “The Conjuring 2.” A demon, Valek, takes the form of a nun to work its way into the lives of a convent to manifest itself.
Being a fan of “The Conjuring” universe, this film was a letdown. The writer, Gary Dauberman, created the screenplay but seemed to forget the key point of any film: a plot. The movie relies on cheap jump scares and comedic relief every 10 minutes or so.
Jonas Bloquet plays Maurice “Frenchie” Theriault, whose character always has some sort of funny quip to say every single time he comes on screen. I understand that with horror films you want to have a break from the suspense, but hearing the audience laugh every time Frenchie appears is strange for this film since it’s considered to be the “darkest chapter.”
If anything, the trailer pretty much gave the entire movie away, including the biggest jump scare of the entire film.
The cast of the movie includes “American Horror Story” alum Taissa Farmiga, who is actually the younger sister of “The Conjuring’s” Vera Farmiga. To prove the point of bad writing, Taissa Farmiga’s character, Sister Irene, reveals that she is able to have visions but not much is explained as to how or why she has these visions.
The foreshadowing is very upfront with the audience, and if you miss it, something is wrong with you.
This movie reminds me of the first “Annabelle” movie — a terrible film that was hyped up. If the studio decides to make a sequel, perhaps it will be much better just like “Annabelle: Creation” was with an actual backstory.
The most interesting part of the film comes at the very end when they reveal how exactly “The Nun” ties into the first “Conjuring” film. Without giving it away, the short amount of time Valek was shown in “The Conjuring 2” was much more terrifying than the amount of time the demon was shown in this movie.