Hamburgers have every food group, but every place has their own distinct flavor. The Foghorn editorial staff decided that no expedition is too grand, and found four local burger establishments to see if they met the expectations for the best burgers in Corpus Christi.

The cheddar bacon cheeseburger topped with avocado came with an order of french fries and as many vegetables as desired.

I decided to try Wallbangers in search of the best burger in town This search hit home for me because my family and I have been on the lookout for the best burger ever, so cheeseburgers are nothing new to my palate.

I had been to Wallbangers before, but it hasn’t been recently, so I chose to check it out for a little reminder. The décor was just as a remembered, a short wall separating the line to order and the seating area. The walls are adorned with images of old-school celebrities and flat-screen TVs.

Wallbangers is well known for their stuffed burgers ranging from mushroom Swiss to cheddar bacon. Instead of overestimating my ability to put away food, I settled on getting the cheddar bacon cheeseburger, unstuffed topped with avocado for a dollar more. It came with an order of fries and for the drink I got water.

My name was announced over the loud speaker letting me know it was time to get my food. At first glance the burger was ginormous without any of the vegetables. There was a vegetable bar for those who desired vegetables or you can eat it without. Plus I got to decide the quantity of the vegetables, which was fantastic because I am obsessed with pickles on a cheeseburger.

After topping my burger with copious amount of the vegetables I craved, I took my first bite. The homemade sesame seed bun was soft and delicious and not a soggy mess like some burger places. The meat was a huge portion, but it was very under seasoned. The only thing saving the flavor of the burger was the thick, crispy bacon and the delicious, melted cheddar cheese.

The french fries were like no other french fry I had ever seen. It wasn’t a curly cut or a steak fry but more of a hybrid of the two. It was thick like a steak fry but shaped like a curly fry. I didn’t care what they looked like because they tasted so delightful.

I only managed to finish about a third of both my french fries and burger before I couldn’t eat anymore. I was overall very pleased with my experience at Wallbangers. The staff was pleasant, and my money went a long way for the amount of food I received. 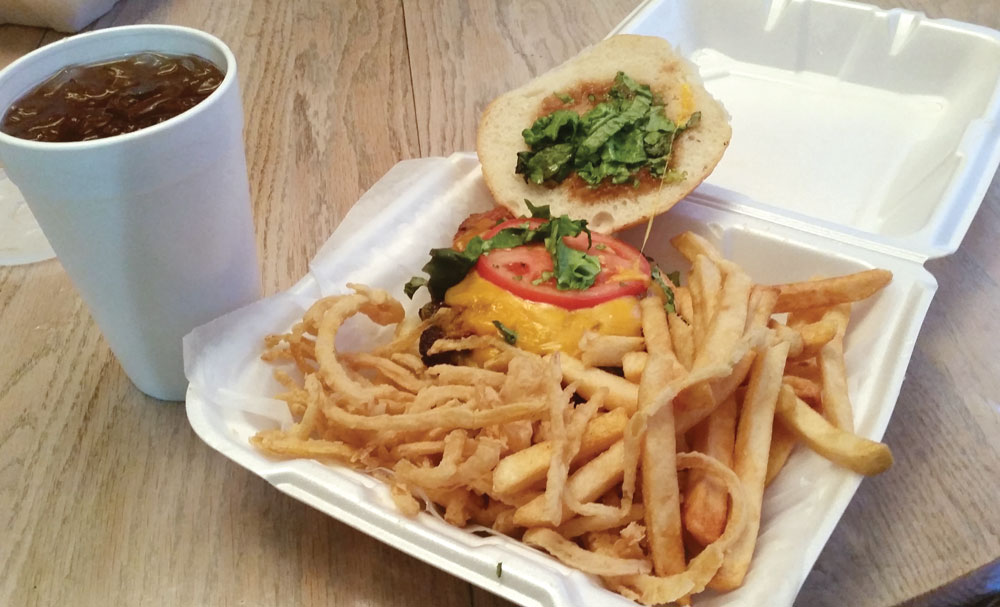 The Jack Daniel’s Burger came with the special Jack Daniel’s sauce served on a sweet bun, but it was served with unimpressive sides.

I ate at Googly’s on a Wednesday evening, barely noticing the “We Deliver” sign that could have made my life easier. Instead, I walked in and ordered to-go because I had to feed two other empty stomachs, but I bought everyone a different burger. I chose the Jack Daniel’s burger for myself and answered yes to everything the cashier asked involving the burger, which brought my total to $10.48 for my burger, alone. I wanted to try it all. While waiting, a few people walked in to receive their orders, which they had called in while the new girl, me, waited patiently.

The small restaurant had a cooler for those who want to buy a beer, and a drink fountain with free refills. For three burgers, three orders of fries and three orders of onion rings, which all came with the meal, it took almost 20 minutes. I didn’t ask for a drink carrier, but if they had them, I think they should have been beside the drink fountain.

Normally, I’ll eat the burger and save the fries for last because fries are usually the best part. This time, however, I ate the burger first because I couldn’t stop. I took a bite, then I wanted to try it again and enjoy the flavor. The buns were sweet, and everything on the burger made it better. Even the Jack Daniel’s sauce, which I found in a thin layer on the bun, didn’t overwhelm the rest of the burger. I fell in love, and that’s not common for me.

I can’t say the same for the fries or onion rings, however, and I wished I had eaten those before anything else. The onion rings had more batter than onion because they were cut too thin. They reminded me of the onion crisps you buy to sprinkle over green bean casserole, though they tasted a little better than that. The fries weren’t impressive either — they tasted like a fried potato would taste without salt or any hope to revolutionize the french fry. Neither tasted bad, but they didn’t impress me. When I eat there again, I’ll probably save the calories and spend them on just the burger, because that’s well worth it. 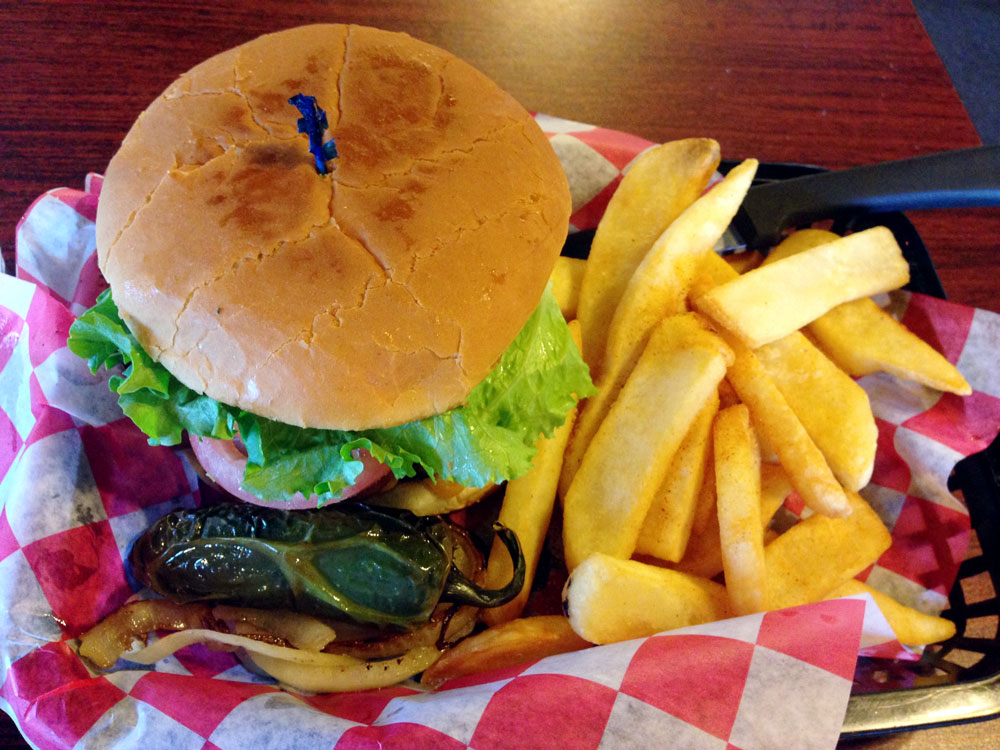 When I first walked into the House of Burgers, I was surprised at how empty the place was, but more in awe of the comfortable environment. I was able to enjoy the ’50s throwback music that the restaurant had to offer as I waited for my server. It was a little out of place, for the restaurant had more of a Brewster’s Street kickback look, but no one can go wrong with a little rock ’n’ roll.

When my server arrived to my table, she was straight to the point and I was in between choosing the Fiesta Burger and the Mexican Burger. She immediately persuaded me to try the Mexican Burger so I decided to go out of my comfort zone and experiment. When the burger came out, I was in awe. It consisted of a half-pound of Angus beef, smoked ham, sliced avocados, sliced tomatoes, grilled onions, lettuce and a juicy jalapeno to top it off with a regular white bun with a side of french fries.

The fries were fresh out the fryer and delicious. Every bite was as crunchy as the last. They were lightly seasoned, but I wish they added more seasoning though, because I always love my fries to be very seasoned but I was pleased nonetheless.

As for the burger, I had set my bar way to high and I’ll tell you why. The ham was more profound in the burger than the jalapeno and after several bites I was getting tired of the ham. The avocados kept falling out of the burger as well as the tomatoes.

The burger was decent and fun to try, but I regret taking the advice from my server. I believe I should have stuck with my gut and chose the Fiesta Burger, for the ingredients in that burger were more of my taste than the Mexican burger.

The service was also surprisingly poor. In the beginning, my experience started great but toward the end I hardly saw my server. I was waiting for about 20 minutes for her to come to my table to give me my check, but I never saw her again after she took my order. I had to stop another waitress just to get my check. I was pretty disappointed.

In the end, I’m sure if I came at a different time of day, had a different server and a different burger my experience at the House of Burgers would have been great, but sadly it was not. 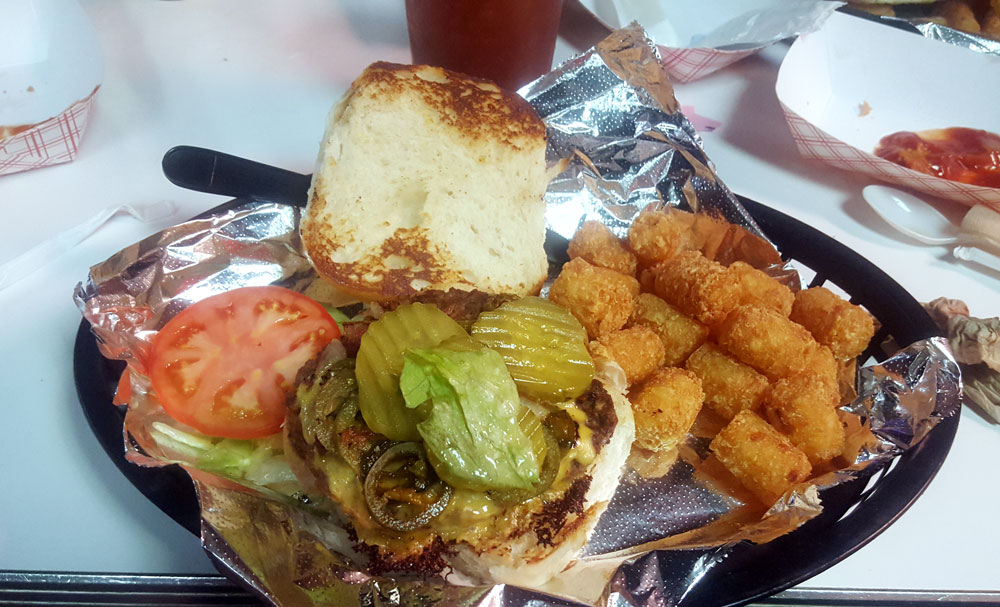 The Atomic Burger was served with cheese, bacon, grilled jalapeños and onions on toasted buns.

Upon arriving at J.P. Bombers, at 6109 McArdle Road, I noticed a banner outside that read, “Come try the best burger in town!” Because that’s exactly what I was hoping for, I accepted the challenge. I was eager to see if that saying was true and went inside the restaurant, which was very small. The hostess was about to seat me after she cleaned the table, which gave me an opportunity to look around the restaurant a bit.

I saw the highlighted burgers posted around the walls giving the customer what they’re in for which I found kind of neat. But the one thing that caught my eye was this burger challenge called the “S.O.B (Son of a Burger) Challenge.” In this challenge, you must finish a burger with six patties, three stuff jalapeno bombers, fries and a 24-ounce drink. If you complete the challenge the burger is free but if you fail you will have to pay $35. But I was looking to enjoy my meal and not clog up my arteries.

The hostess seated me and I ordered a unsweetened iced tea and decided to try the Atomic Burger, which had cheese, bacon, grilled jalapenos and onions served on toasted buns. You have a choice to have french fries or tater tots and I took the tots.

I noticed that besides the small dining area, the place could be kept up a little better with its cleanliness. It wasn’t completely filthy, but some tidying up in certain areas could help out a bit. When my burger finally arrived about 10-15 minutes later I look at it and noticed the bacon was in bits and not strips as I’m used to. I put the pickles and lettuce, which are served on the side, on my burger.

I bit into my burger and I honestly felt bliss knowing the burger was fresh. The jalapenos added a good kick to the burger, adding just the right amount of spice. The bacon bits were crispy and went great with the jalapenos, meat, cheese and lettuce really well. The tots were really good too, crisp and not soggy at all.

The waitress was nice, refilling my cup with tea from the dispenser, and the meal totaled just under $14. Despite some improvements with cleaning, the burger was fresh and I wouldn’t mind coming back to try their other items on the menu. If you’re looking for a good sit-down-and-eat burger place, J.P. Bombers is definitely worth checking out.