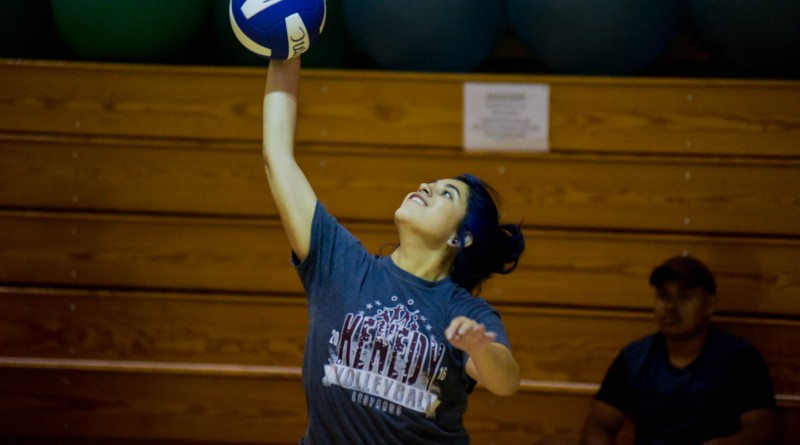 Gabriela Albiar serves a ball during the volleyball serve challenge on September 25, 2017 in the Kinesiology building

Team Just for Fun came back to beat Team K.P.R. in this year’s kickball tournament on Oct. 2.

Team K.P.R. won two games while Team Just For Fun won three. During these five sets, Team K.P.R. was in the lead throughout most of the tournament. However, in the fifth set, Team Just for Fun really lived up to its name.

Miriam Duran, a student who engages in many intramural sports, said she does so for several reasons.

Being able to go out and play just for fun, meeting new people and encouraging others made my day. The gym was filled with laughter throughout the game and the win in the end was just perfect,” Duran said.

Throughout the game, there would be quick switches of teams because of the players kicking the ball so hard it resulted in an out. There would also be changes in everyone’s excitement levels because once a player made a home run the others would try to follow.

The players acted as if they were playing for a major league of some sort, which made the crowd eager to see who would score and who would win.

“It is great to see how Collegiate students and college students get along so well with each other,” said Carolyn Robles, who was in the crowd supporting Collegiate.

There was a good mix of both Collegiate students and Del Mar students. Most of them all knew one another and their relationships really made the game interesting.

Capture the Flag made a quick appearance the following day. Capture the Flag is flag football. Usually, there is an ongoing rivalry when it comes to Collegiate students. Different grade levels love to compete against each other to show off their skills.

Brian Martinez, an ongoing participant in Capture the Flag, said he was looking forward to his final year of participating.

“I am looking forward to winning because I don’t like to lose in these games. I am really am excited to play this season,” Martinez said.

October also saw the volleyball tournament wrap up. Next up is table tennis on Oct. 9.

Be sure to check www.foghornnews.com for the intramural schedule. Most of the events are listed for October with still more set for November.